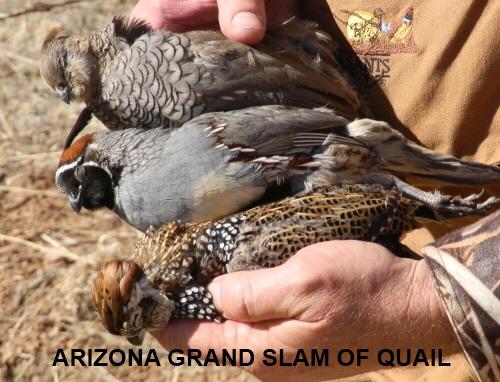 Licensed Arizona Guide, Mike Cross, is pleased to offer guided quail hunts in Southeastern Arizona near Tucson.  Mike is a Wildlife Biologist by profession and uses his spare time guiding bird hunts.  Mike is an active member of the North American Versatile Hunting Dog Association (NAVHDA) and trains/tests some of his dogs through the NAVHDA system. Quail hunting with dogs, or any bird hunting for that matter, is Mike's passion!

The hunting areas are located within diverse habitats throughout Southeastern Arizona. The primary species hunted is the Gambel's quail, characterized by the male's black mask and black tassel on top of its crown. Gambel’s quail  are found primarily in the Sonoran Desert, consisting of low grass, prickly pear cactus, brush covered hills, and mesquite-filled washes. Scaled quail, commonly referred to as blue quail or scalies, can be found along with Gambel’s quail in semi-desert grassland habitats.  The iconic Mearns' quail are hunted in the oak woodlands within Southeastern Arizona’s higher elevation “sky islands”.  Due to a longer drive to the hunt areas, the Mearns' package is offered at a slightly higher rate than the other two species.  All quail hunted are wild, native birds.  In season, hunters have the option of adding an afternoon dove shoot and/or morning puddle- jumping for ducks to their package. 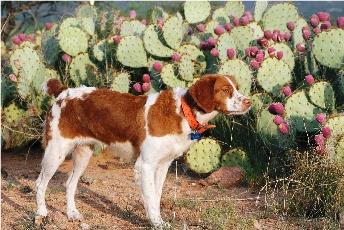 K9’s Sipping Tequila (call name KiKi) is a seven -year old female Brittany and is Mike’s  most experienced dog. A small, energetic dog who really burns up the field, KiKi has earned the nickname "pocket rocket" from Mike’s hunting buddies. She points, is steady to wing and shot, and retrieves on both land and water. She was raised on a pheasant shooting preserve and run in field trials before being acquired as a two-year old finished gundog. In addition to being used extensively on all three species of Arizona quail, Kiki fetches the occasional duck, is hunted on doves and blue grouse, and also makes an annual trip to Nebraska for wild pheasants and bobwhites. 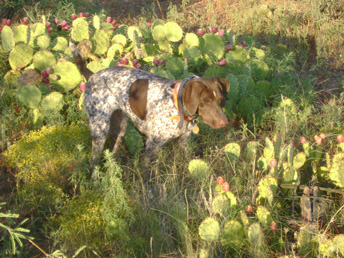 Schotzy is a seven-year old female German shorthair pointer. She was raised in Phoenix and professionally trained at a pheasant club in central Arizona. Unfortunately, her elderly owner became disabled and could no longer hunt her. Mike obtained her as a four-year old finished gun dog. She is an intense hunter with dive and stamina. She is especially adept at recovering cripples and is Mike’s best tracker. 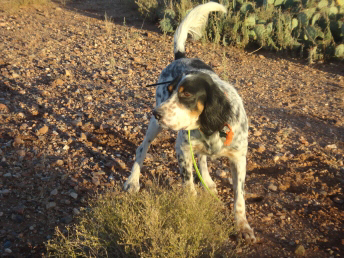 Tug is a five-year old male English Setter who's field trial career was cut short due to a minor flagging (tail wagging on point) problem.  Although trial judges frown on flagging, Mike does not care as he is a bird finding machine!  He usually does not even flag on wild birds anyway.  Tug is fully train, is steady to wing and shot, and retrieves to hand.  A happy and biddable dog, Tug is a medium to wide ranging hunter who glides across the field and is a joy to watch. 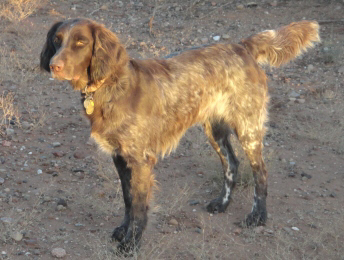 Batamote Vom Caraschatten (call name Betty) is a German longhaired pointer.  Her Mother, Cora Vom Illertal (call name Kaylee) was once called "the best longhair in North America" by a visiting German field trial judge at an American hunting test. Her father is a Danish import who has excelled as both a hunter and show dog in Europe.

With very little formal training and lots of exposure, Betty has become an exemplary gun dog. She retrieves to hand on both land and water, locates and points her own birds, and will follow a fresh track line. During her first hunting season when she was only 6-10 months old, she hunted over 100 days. During that time she independently pointed and retrieved over 200 quail, 30 wild pheasants, and few blue grouse. She also retrieved over 300 doves 70 ducks, and a few snipe. When she was 11 months old, Mike and Betty traveled to California for a NAVHDA Natural Ability (NA) Test. In order to pass the NAVHDA NA test, a dog must point live game birds, demonstrate that it is not gun-shy, complete two water retrieves, and track a wing clipped pheasant. Betty was the youngest dog entered who passed, earning a Prize I with a perfect score of 112/112 points!  Mike still has the pheasant that now lives in a pen with his training ducks and pigeons. Being a versatile gun dog, Betty will work upland game birds, waterfowl, and furred game. In addition to working as a quail dog, Betty is used extensively on ducks and doves and will track, tree, and retrieve squirrels for Mike and his eight year old daughter Molly. She is also in training to become a blood-tracking dog to aid in the recovery of wounded big game.

Henriqua Hubertus, call name Riqua, is Mike's second German longharied pointer and is a very accomplished retriever.  A strong swimmer, Riqua has fetched numerous ducks from ponds, as well as pointed and retrieved many quail for hunters. 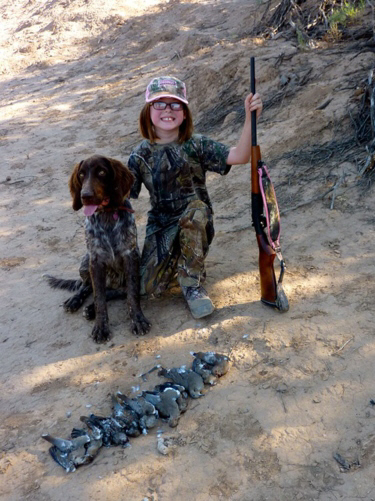 Hunt Basics: The typical daily quail hunt starts in the morning before the sun rises and ends mid-afternoon (about 2-3pm).   Non-resident quail hunters will provide their own lodging at a hotel.  The closest or most convenient places to stay can be recommended.  Hunters may transport themselves to the edge of town where they will be met by the guide or can be picked up at their hotel and taken to the field.  Hunters can choose to hunt for only one day or up to three.

Please note that these hunts may require long hikes in hilly terrain, so be prepared physically.

Licenses: Hunters must buy a license and any required migratory bird stamps before meeting the guide.  They can be purchased Online, at most Arizona sporting goods stores or Walmart.  Only a valid Arizona Hunting License is needed for quail.  In addition to the hunting license, special stamps are required to hunt doves and waterfowl.  Non-resident hunting license - $20.00 per day for short term hunting license, $160.00 for the calendar year, all Youth hunter hunting licenses (Residents or Nonresidents 14 to age 18) are $5.00.  Resident adult hunting license - $37.00.

*There is a 2 person minimum. You must bring the other hunter to share the guide with.

A minimum 50% non-refundable deposit is required to book a hunt. 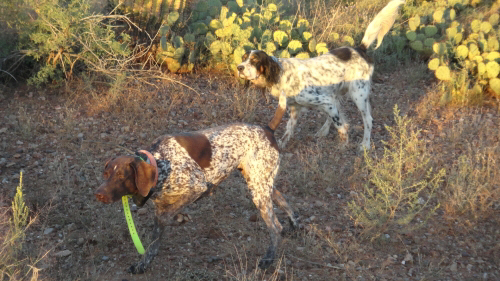 Tug and Schotzy on point 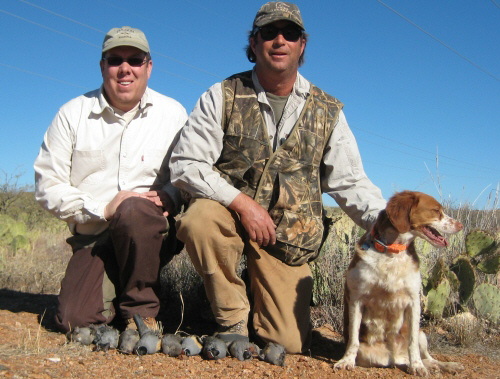 Scott Heinemann of Nebraska took 9 Gambel's Quail over points, with only 11 shots! 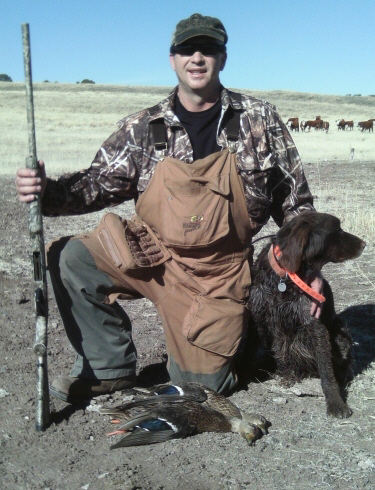 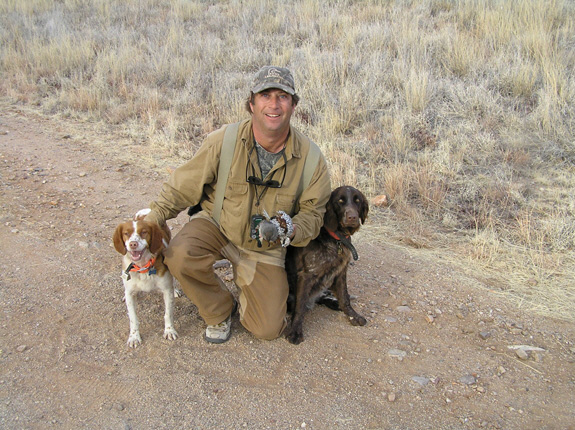 Mike, Tequila, and Betty with a cock Mearn's quail and a hen Gambel's 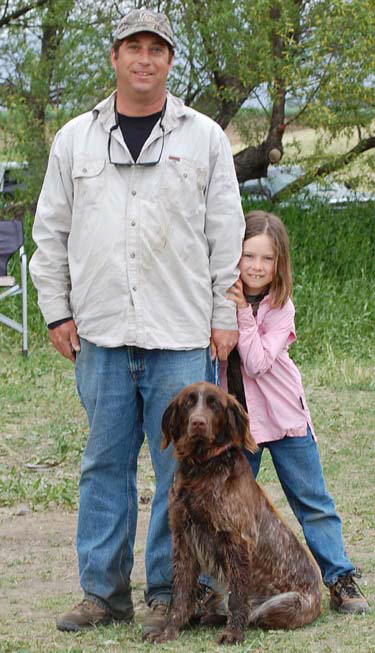 Betty with Mike and his daughter Molly at the NAVHDA hunt test.  Betty earned a Prize 1 with a perfect score of 112/112 points!