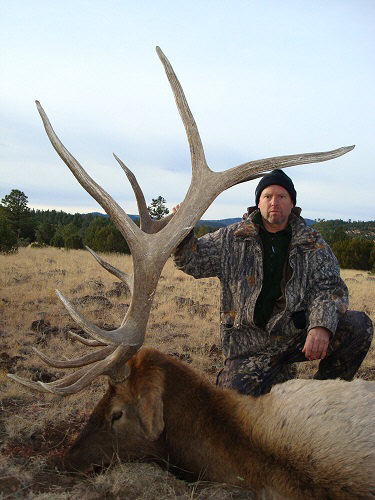 As I started scrambling down the rock wall of the first draw that I needed to cross in order to close the distance on the tall, wide-racked Arizona bull, my thoughts were, "I hope this has a different outcome then when I made this same attempt two days ago."

This is Arizona, the late rifle hunt.  It all started several years ago when I first contacted Pat Feldt, owner of Arizona Guided Hunts, about an elk hunt.  He graciously advised me what areas to apply for and offered his condolences as my drawing results were unsuccessful.  However, November 2007 would find me in Arizona with Pat as my guide.  On the second day of the hunt, we were on a bluff overlooking a wide shallow valley studded with small meadows and thick stands of Juniper trees.  As daylight started to filter its way into the sky, a blanket of fog covered the valley.  Reducing visibility to less than 75 yards at times.  It didn't look good.  Then as the fog started to break up and visibility improved, Pat whispered, "Hey, here's a bull."  I took a look through his tripod-mounted 15X Swarovski binoculars and saw a big mature bull feeding some distance away.  I gathered up my gear and started down to the area that Pat suggested.  He stayed back to watch from a distance.

When I reached the bottom,  I was not the only one there.  Three other hunters, obviously headed for the same bull, are less than 75 yards away.  I decided against trying to beat these guys to the bull.  However,  I continued on, as anything can happen.  I found a game trail that got me down and out of the second small draw and up to the lower end of the meadow where I had last seen the bull.  Once again I spotted the other hunters.  So, I thought I would wait and see how this played out.  I had stopped between two junipers that offered me good cover and set up.

Then it happened.  The sound of limbs and brush snapping and breaking.  Here comes an elk!  Just a cow.  She stopped within a few feet of me and started looking back from where she came.  I was ready for the bull to come charging out the same way, but nothing happened.  The cow wandered off and it was apparent the bull had made his escape in another direction.

The next couple days found us looking over many bulls, but nothing that Pat thought we should go after.  One afternoon we had a herd of over 50 elk bedded at the edge of a meadow that contained 17 bulls, one was a decent 6X6 with a broken tine.  Pat felt we could do better.

Day four found me in the same position as the second day and surprisingly on the same bull.  Now when I made the bottom of the first draw, I looked, no other hunters.  I covered the ground as quickly and as safely as I could, taking the game trail and through the second draw to the meadow.  Coming out almost exactly where I was two days ago, I checked the wind and it was perfect.  I found the bull, but all I could see were giant antlers sticking above a juniper tree less than 200 yards away.  I was set in the prone position with the .300 magnum on the bipod.  If he steps out I should have a clean shot.

All of a sudden, trouble.  Three mule deer does have stepped about 75 yards away and are looking at where I am laying in the grass.  I know if they blow out, so will the bull.  I silently wish the deer would mind their own business and move along.  After what seemed forever, but was a matter of seconds, they amble off.  The bull however has moved a couple steps.  I crawl around the juniper to change the angle.  It worked, the crosshair is where I want it.  I squeeze, fire, the bull spins and disappears into the junipers.  I turn on the two way radio to Pat and let him know I think I hit him well.  His reply was what I wanted to hear.  "You did, he just fell over."  The bull had went about 30 yards.

Walking up to him, he was more than I could have ever hoped for.  A heavy-horned 6X6, 350 class bull, four feet wide with long tops.  After pictures and field dressing, Pat remarked, "You did everything right."  A compliment from a guide of his caliber was very much appreciated.  I was very thankful for a second chance at this magnificent animal.

Back to Main Elk Page