This story was written by a 12-year old hunter who was excited to tag his first javelina in Feb. 2001. 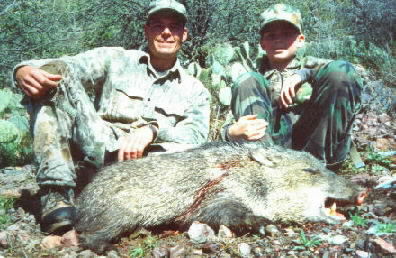 Last fall, my Dad contacted Pat Feldt, owner of Arizona Guided Hunts, and arranged for me to go on a pig hunt. My dad has hunted javelina most of his life but wanted me to have the experience of hunting with a group and camping out. I am twelve years old, so this was the Juniors-Only rifle hunt in Arizona, which is meant for hunters 10-17 years of age.

My dad and I arranged to meet Pat at a gate off the highway on the afternoon of Feb. 8, 2001. The weather was cold, rainy, and even beginning to snow! I was thinking this trip might turn out to be awful! We arrived at the gate, and a few minutes later, there was Pat, right on time. We followed behind Pat in his truck for a mile or so and came to the camp he had set up and ready to go. There was a large tent with a wood stove for heat. He had it all ready when we arrived. I was really glad, because it was snowing hard by then. Dinner was bear and elk meat, which was great! It snowed all night and when we got up sometime around 5:30 a.m., there was 3 or 4 inches on the ground. I was worried, but Pat said that it would be a good day to hunt for the pigs because they would stay out longer feeding. We headed out of camp to an area where Pat had seen pigs before.

We glassed for an hour or so in one spot up on top of a hill, and then moved on to another location. In this spot, up high so we could glass the hills, Pat spotted a herd of Javelina. There were about 12 to 15 animals in the herd. He figured they were about 1,200 yards away, so we walked along a road to the east of the herd to see if we could get closer. After walking for about 20 or 30 minutes we climbed a rocky hill and again found the herd. This time they were about 200 yards away, towards the top of a mountain, feeding. The hill that we were on was full of thick brush and bushes. Finding a good spot to shoot from was really hard. I positioned myself on the only rock that would hold me and Pat instructed me to look at the pigs through my rifle scope until I knew their positions and was comfortable with getting a shot. I was shooting a Remington .243 youth model, which my dad had sighted in at 3" high at 100 yards. Just before locating the pigs, we accidentally made a noise. Luckily, the pigs didn't run, but they did stop feeding so we knew they had heard us. We waited a short time, until the pigs began to feed again. Pat then told me he had a pig spotted. The pig was a large adult, and no other pigs were in the way of my shooting at it. My heart was racing, I shot! I missed, but the pigs didn't run. I shot again, the pigs moved some, and I had missed again. Pat had ranged the pigs at approximately 160 yards. I put a third shell in the chamber, located a large pig, and shot again. This time Pat and I both could tell that I had hit the pig good. It ran into the brush and we waited.

After a short time, two pigs began to feed in the only open area on the hill. One was a very large boar with a blond spot on it’s side, the other my dad said, was probably a sow. Both of these pigs kept looking back into the bushes as if something was there and they were waiting for it. Soon, out from the bushes came the pig I had shot. The pig staggered into the clearing and lay down. I could see it was moving slowly and Pat and my Dad figured it was hurt bad. Pat had picked it up in his binoculars and told me to put another round in the chamber, aim towards the bottom third of his body and squeeze the trigger slowly. I aimed just where he said, the bullet struck and the pig rolled down the slope of the hill and into the feet of the two pigs that were standing close by looking up at it. My Dad and Pat shouted " Good Shot Bobby, he's down". Boy was I happy!

After picking up our stuff, we went over to the pig to get a closer look. It was a large boar. Pat believed it to be about 36 pounds dressed-out and 4 years of age. It had a lighter color to him than some of the other pigs in the herd and my Dad said it was a great first pig, it was even bigger than the one he got this year archery hunting. After taking pictures and gutting my pig with Pat, he strapped it to his backpack frame and we returned to camp.

Back at camp, we ran into a Guide of Pat's, Howard Ferguson, and his son, Evan, who was also trying to get a javelina. They had spotted a herd earlier and my Dad and I told Pat that we would try to help them find the herd in the afternoon. After lunch, we all went over to the area where the pigs were seen in the morning and Pat again glassed up the pigs. They were up high on the hill. Howard and his son made as close a stalk up to the pigs that they could, the son fired. The shot missed and the pigs ran over the top of the mountain. It was a good attempt, barely missing the pig that he had chosen and over 240 yards away. After playing the video Pat took, Evan only missed by an inch over his back. They were able to locate the pigs on the other side of the mountain before it got dark, but were not able to get another shot. They went out the next day, be we still hadn't heard whether or not the other boy had gotten his pig, I hope so.

My Dad decided we would stay and try hunting varmints in the morning before leaving to get back to town and get the meat processed and the pig to Pat's taxidermist (Weller's Wildlife Studio). We got up early, tried my Dad's call, with no luck. We had hoped to call in a bobcat or fox because we had seen their tracks in the snow while looking for my pig. When we returned to camp, Pat had cooked up great breakfast burritos for us. We ate, and then left for town.

This was a fantastic hunt. I will never forget it! Pat was a great guide and lots of fun. If you're looking for a great hunt with someone who knows the areas and the game, pick Arizona Guided Hunts. You won't be disappointed. My Dad is hoping to hunt bear with Pat in the near future. 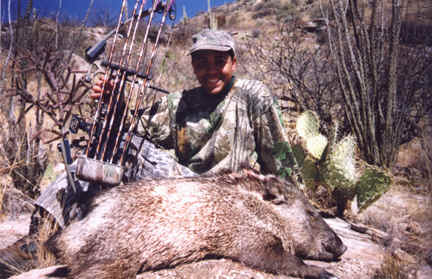 An Archery Javelina Hunt to Remember

The herd of seven javelina was gradually feeding up the shin-dagger (a very spiny cactus) filled slope at 400 yards across the canyon. From experience of hunting this herd for years, I knew exactly what they were going to do. They were heading for a known bedding area. We would watch them and wait until they bedded. Then we would make our move!

It was a warm late February morning during the rifle javelina hunting season. Earlier, we had climbed the uphill mile to our vantage point and began glassing with 15X60 tripod-mounted binoculars. I was guiding a father and son pair, Greg and Trey, from Maryland. They were not using rifles on this hunt. If it came to the last day, then they would breakout with their guns, but they wanted it to be a big challenge and use their bows. This was perfectly fine with me because I sometimes feel javelina are meant for hunting with bow and arrow or handgun.

It was decided that the son, Trey, would follow me as I led the stalk to the sleeping peccaries. Dad stayed back and videotaped the action. As we worked our way to the other side of the canyon, the wind played tricks on us. We had to change our route many times to eliminate the possibility of being detected. Wind is the most frustrating part of hunting or stalking animals inside deep canyons.

With the wind finally in our favor, we reached the last 20 yards from the bedded herd of javelina. Then all hell broke loose! It sounded like a herd of cattle going down the mountain with rocks rolling, branches breaking and not to mention the “woofing” sounds of alert javelina. “What happened?” I asked myself. The wind was in our faces, they had not seen us, and we were silent in our approach. The pigs showed no sign of stopping. You see, once they smell human scent, it is all over. The wind seemed to be in our faces, but on ridges it can swirl back around and this is probably what gave us away. Now I had one alternative that I usually only take when all else fails...a predator call.

The predator call I held screamed-out an awful squall, but got the attention of the lead javelina boar in the pack. He instantly stopped, turned his head in our direction, then made a beeline for the noise of my squalling flute.

I had my hunter in position for the angry, teeth clattering, woofing, charging animal. By the looks and sounds of it, this javelina boar was ready to do battle to any intruder messing with his herd. Trey stood with an arrow nocked and waited for the command to shoot. As soon as I stopped blowing the flute, the boar stopped at 15 yards. I gave the command. The arrow launched from the Martin bow, sunk into the beast’s chest, came out the other side, and continued to sail down the mountain. The javelina ran out of sight. I gave Trey a high-five because with the excellent shot, I knew this pig was hurt good.

After following the bloodtrail for 100 yards or so, we found ourselves standing over a HUGE javelina boar. It dressed at 55 lbs. (a whopper) and ended up scoring in the top 10 SCI. The next morning was just as exciting as the father shot a nice javelina at 21 yards! All in all, it was a great father and son experience, not to mention it was only a day and a half of hunting!

For more info on a guided javelina hunt, visit our main javelina page.

Back to Main Javelina Page